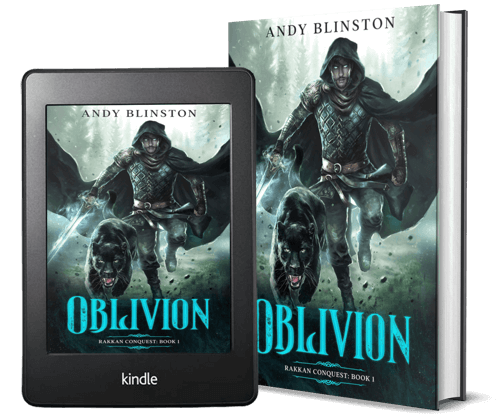 With the upcoming release of Viridian Legion, Book 2 in the Rakkan Conquest series, I thought it would be a good idea to post a short summary of Oblivion, the preceding book, for those people that need a refresher on it and don’t have the time to read it all again.

You can read this in conjunction with this glossary of terms for the series.

The story takes place on a single, large island where two races live, humans and rakkans, who are engaged in a constant war. There is a single goman named Archimedes that has travelled to the island and has a weapon (Staff of Arria) that can win the war for the humans by weakening rakkans. If he falls, it’s likely the rakkans will overwhelm the humans.

The humans are united in a single empire of the city Toria, led by King Medus. Each human city has a regent that governs it. Conversely, rakkans cities are not united and each has a warlord that rules them.

The rakkans are initially set up to come across as a race of demonic villains but we later learn they are a mixed bag much like humans. Some cities are decent but others are depraved.

Most rakkans are super strong and can conjure ferven, a hot, fiery substance.

A small proportion of humans are born with powers: super speed and can conjure algor, a cold, blue substance. They are usually exalted as algus.

Darius has his memories stolen by Archimedes, including his empathy and compassion for others. He has one memory of his childhood left which is his baby brother dying in his arms. After that he wakes up and is being chased by Archimedes and cares only for his own survival.

He has a panther escort named Lyra who travels with him. They are met by an algus named Lex (Alexandra) who says she will help him and a twelve year old boy named Omid. She takes them to her home city of Laltos and teaches Darius some things along the way.

Darius is angry with her—the first time he realises he actually cares about another person—but eventually understands why she did it. Then then go to meet the Waif Magician, a half-goman, to try and find a way to get Darius’s memories back and defeat Archimedes.

The Magician explains that Archimedes sees his future memories and can only be killed by being blinded in a sudden attack. She leaves the pair when Archimedes finds them but in secret, the Magician meets with Archimedes and says she will deliver Darius to them.

Darius and Lex next travel to Darius’s old home city of Margalvia where he meets three allies he had previously, Sulla, Brutus and Varro, who are all rakkans. At this point Darius learns that he is in fact half-rakkan and that is why Archimedes is hunting them. Archimedes wants the location of the Urukan Mine, the only source of kuraminium in the land. This is the only known metal that doesn’t melt when in contact with ferven and is used by the rakkans to arm themselves. He discovers that the rakkan cities hate each other but have a treaty to allow them to share the mine.

They later lure Archimedes into a fight in which they succeed in killing him and ending the threat to Darius and the rakkans. But the Staff of Arria is stolen by Waif Magician.

Oblivion finishes with Archimedes dead and, as a consequence, the humans facing a new threat from another wicked rakkan city, home of the Viridian Legion.

Darius is a warrior afraid of blood. He is at first amoral and selfish and cares only for Lyra. Lex tries to teach him to listen to his moral compass. By the end of the story he decides he should try to follow it and just wants to be a strong warrior to protect those he now cares about given that, so far, everyone he has cared for seems to have died.

Lex is daughter of a regent and an algus warrior. She’s often callous due to her overwhelming quest for revenge on: Archimedes for taking her son, and the Viridian Legion for killing her husband. She has no character arc other Lex achieves her first ambition of killing Archimedes.

The pair share a bit of romance, kiss, but nothing further happens. Darius falls for her. Lex clearly has feelings for him but the extent is left ambiguous.

Nikolaos is the point of view of the team around Archimedes. He is a philanderer and cares only about his own ambition. Is a bit of a coward and ends the story being captured in Margalvia.

Sulla is a comedic character, most characterised by his total lack of fear.

And that’s Oblivion! You can get the next book in the series here.