I hope you’re all well in these troubled times. In this newsletter I have some historical gold to share, exciting updates on my latest book, and an example of just how baffling some of you fantasy readers are.

I’m still locked down here in the UK, which has given me plenty of time to write and read. When I’m not working on my next book, I’m making my way through Jim Butcher’s Codex Alera series, after a reader recommended it. I’m glad he did because it’s fantastic.

The Battle of Helm’s Deep

First, I want to share something fascinating I found.

I’m pretty sure everyone reading this knows what fantasy book/movie Helm’s Deep is from and are already picturing legions of Uruk-hai scaling ladders and storming ramparts. It’s definitely my favourite fantasy assault on screen, and I struggle to think of any done better (if you are tempted to say the Battle of Winterfell you must unsubscribe now).

What you may or may not have wondered is how this battle compares to real historical battles.

Luckily for both you and me, a real historian has gone into painstaking detail about just that, and I happened across his blog posts when doing some historical research for my own books.

The posts are a long read, but are well worth it.

The writing of Rakkan Conquest 3 is going to plan and I’m still hoping to release it this summer. I’m happy to say that I have received feedback from alpha readers on the first draft and have already commenced revisions to make the story even stronger.

I’m excited for you to read this book as it really unleashes Darius is all his terrible glory, something which we only saw hints of in the first two books.

With the alpha reads done, I’ve begun thinking about the next stage of the process once my revisions are complete. I have a few spots open on my beta reading team, so if anyone is interested in joining this, please contact me using the menu.

Beta reading will involve reading a copy of the book in March and answering a few high level questions on it such as most/least favourite characters, satisfaction with resolution and events etc.

Readers must have read Books 1 & 2 in the series and you’re more likely to be accepted if you have also left a review for one or both of them (doesn’t have to be positive).

I’ll end with something light-hearted. Fellow fantasy author Mark Lawrence recently did a Twitter poll asking readers whether they read the last page of a book before reading the whole thing.

The result was 7.4% of you said you did. I have heard of you strange readers before, and tried to understand why you would want to see how a story ends before beginning it, but I’m afraid you’re unfathomable. I don’t know how you sleep at night. 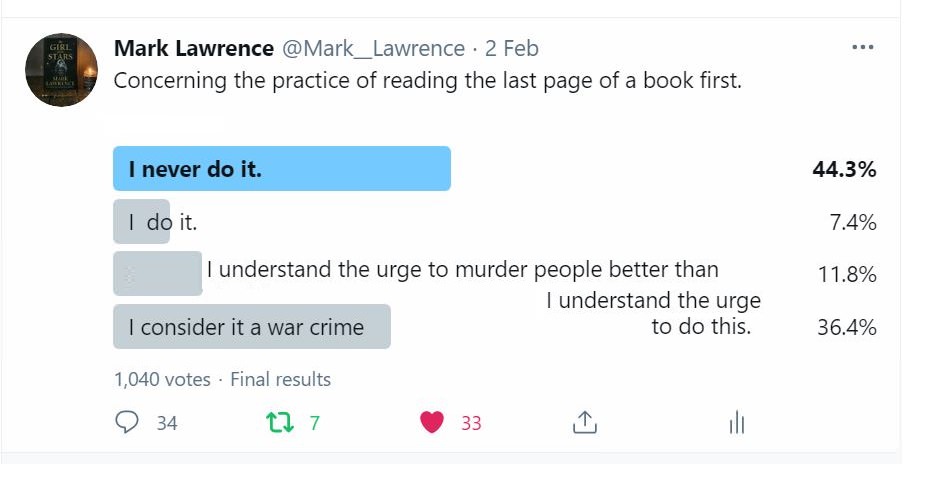 Thank you all for reading. I hope you stay safe and well